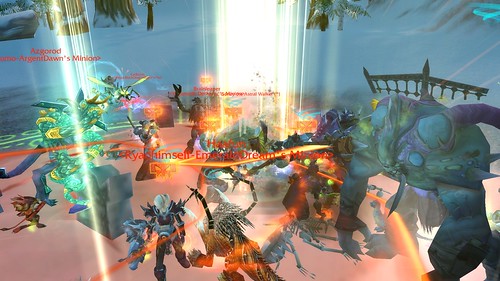 If this is too complicated to implement, then I'd like a "Get Out of PvP Free" ability. Once every 90 minutes, you have the ability to leave a battleground before it ends without the 15 minute debuff. My guild mates and I hung on in Alterac Valley, ultimately deciding to run away from the graveyards, out into the field where we couldn't be auto-rezzed. We wanted to continue to do battlegrounds without the deserter debuff because it's not our fault that we can't play as the event is designed. This is a classic case where an ability to get out would save sanity and make PvP more user friendly.
Posted by Deb Montague at 3:00 AM 6 comments:

Hunters love their pets. When I started playing WOW, you could have 3 pets, period. I got UrsaMajor, a Loch Modan bear, and never considered getting another pet until Wrath of the Lich King brought exotic pets and the ability to have 5 pets with you at once. You didn't need to find a stable master when you could finely tailor the pets you might need to the raid, the group or the soloing experience.

With Mists of Pandaria, our stable slots exploded along with new skin colors and new pets which were suddenly tamable. You're still limited to carrying only 5 but having a total of 55 stable slots means having a wide variety of pets at our disposal. But we still want more. While I don't have all my available slots filled, I know hunters who do. With new pets in Draenor, we are still looking around at all the animals populating the world and thinking, "Why can't I tame that?" Here are two cases in point. 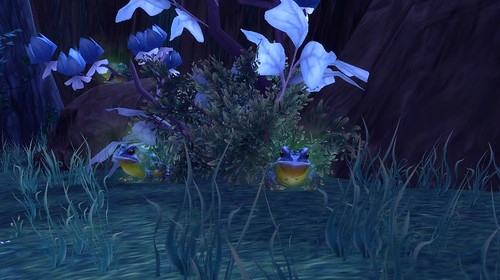 We met large frogs on the Timeless Isle. These two fellows are from Shadowmoon Valley. Frogs aren't tamable. I would imagine the animation to make a frog hop (race?) alongside you as you're riding off into the sunset makes these tough to offer. I'm envisioning their special ability would be a shooting poison or, as the battle pets can do, a sleep or a charm. I might actually tame a frog.

Another animal I might actually get is this wolf from Shadowmoon. 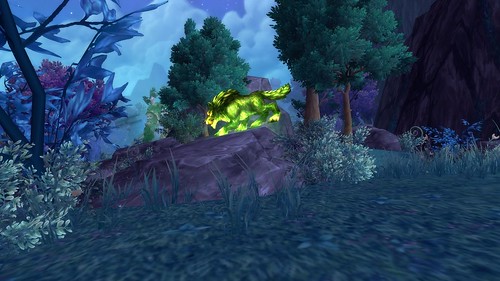 A number of hunters in my guild would tame one of these guys in a heartbeat, if they could. Their inability to be added to a hunter's stable may mean they are considered demons, rather than animals. They have been corrupted by the Shadow Council in residence nearby, as the frogs in the above photo have. Still, that green.

I'm not a fan of wolves. I've never really liked their look but I'd get one of these. I remember when you couldn't tame the runed demon dogs of Wrath of the Lich King. They are to be found usually around warlocks. I have one in blue and you can get a green and a red version. I remember when they were added to the taming list so there is precedence for making a demon tamable by hunters. I know there is the special shadow wolf, Gara, available for hunters, but I don't care for the purple.

So, Blizzard, we'd like to see these two pets added to our stables. Yeah, yeah, more stable slots would be nice, but I'll settle for the simple ability to tame these.
Posted by Deb Montague at 3:00 AM No comments: 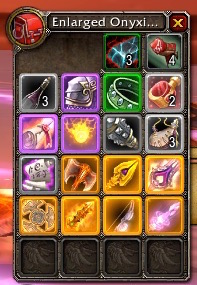 If you've run Tempest Keep, you recognize the items highlighted in orange in the bag. Ah yes. These are the legendary weapons Kael'thas Sunstrider gives you at one point in his fight. At level, you needed these weapons to overcome the adds. Now, they take up bag space or are ignored after the phase when you or the group defeats them.

We got to thinking. These designs are unique. You won't find a complementary weapon in the game. The reasons one runs TK now are:


All are valid reasons for running the encounter. The battle pets and the mount are reasons to run this every week. It took me years to get my Ashes of A'lar mount.

We came up with another reason we're suggesting. What if you could hold onto these weapons for a time outside of the raid? There are a number of things; the ephemeral fishing pole is a good example; that are considered temporary items, but you get to use them for a fixed amount of time. The fishing pole lasts for 24 hours in real time. How that works is you get the pole and the timer starts. Every time you log in, more time is taken off the use of the pole until that 24 hours is up. If you play one hour every day, it will take you 24 days to have the pole despawn. The fishing hats you can fish up in your level 3 fishing shack last for 7 days; again, in real time.

What if these weapons from Tempest Keep lasted for 7 days, real time? They wouldn't have to scale, although that would be cool. I'd use the shield and mace on my warrior cow for older content just because they look cool. Don't allow them for use as transmog, but I like the idea of having these unique weapon skins out in the world for more people to see.
Posted by Deb Montague at 3:00 AM No comments: 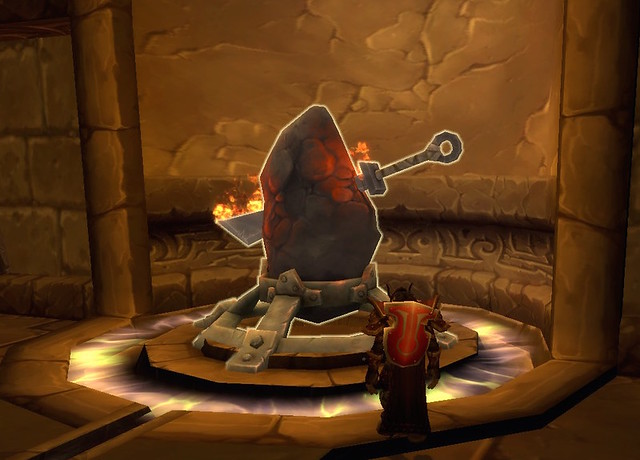 I don't remember this being here.

This is from the Tanaan Jungle starter quests, specifically the quest that frees Gul'dan from his prison. I was running around deactivating the crystals and saw this. I don't remember this crystal having a sword through it when I was through here on Gimmlette. Is this something I can obtain on my warrior? Was it added later? The sword design is one a number of one and two-handers use. It's huge, so I'm guessing it was an ogre's. It's not big enough to be Mannoroth's.

Does anyone remember? Did I miss this the first time through, which wouldn't be unusual?
Posted by Deb Montague at 4:00 AM No comments: