We've come through a slightly traumatic 4 days. For a week now, rumors were flying through the Internet about the demise of the beloved web magazine WOWInsider. For some of us, pretending we didn't know was our best defense. When the news was confirmed, thousands of people felt like they'd lost a good friend.

So, I had this idea. My guild, Spectacular Death, has been around a long time, since December of 2007. We have a unique perspective and focus on this game. We'll never be first into content, but we'll have the most fun when we do get there. What if we made a blog that discussed this game we all enjoy and that discussion was from the casual point of view?

I took the idea to my guild and the enthusiasm is incredible. We're going to bring to our small corner of the WOW-verse, how the game works from a casual player's perspective. You can expect to see photos, including one for the highly popular "Throwback Thursday" theme. You can expect to see "Bug Reports", oh my, do we find bugs. You'll see "Suggestion Box"; some ideas we have for things we'd like to see added to the game. Favorite quest lines; suggestions for downing current tier bosses; a dissection of patches when the patches drop; we have lots of ideas. Everything we post will be for the benefit of and from the point of view of the casual raider.

This will not be a blog about the exploits of Spectacular Death. If you want to know what we're doing, head over to our guild web site. We're going to be providing the casual raider tips, tricks, observations, rants and raves as we've found them within the game. There will be some overlap, we can't help it since current writers are from the guild, but our focus is not on what we're doing in SD. It's to be a resource to the person who has 3 hours one week to play; a spouse, a cat and a job; yet wants to have fun in this game.

This blog is also a work in progress. Some days there will be quite a few posts, while some days, nothing. As we get this blogging idea down pat, you'll see more and more things, more steady columns, more familiar writers. Make sure you bookmark us.

Finally, we had a floor tanking episode tonight. 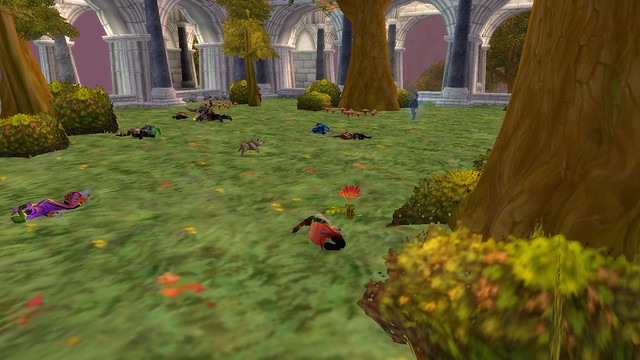 Danged dog.
Posted by Deb Montague at 9:56 PM No comments:

I've been giving some thought to what it means to be a "casual" versus a "hard-core" raider. From my perspective, I think hard-core raiders are focused on the end game, specifically, progression raiding. Everything they do is geared towards that end. In order to achieve end game, they are prepared to put in long hours. Sometimes, they do things they don't particularly enjoy because it will help their end game. Sometimes, they skip things they might actually enjoy because those things won't help their raiding performance. Hard-core guilds have raiding rosters, and only the highest performers will be on those rosters. People in those guilds are competitive and that can come with an ego.

Casual players are in the game to do what is the most fun. They may also want to down the end bosses, but that will not stand in the way of doing something else that will have absolutely no bearing on raiding, just because they want to.

Note that there is nothing in that definition of casual players about how long casuals play or how committed they are to a schedule. The definition also doesn't give a benchmark for how good they have to be at playing their class or how knowledgeable they are about the game. Casuals can do or be all of those things, and more. But, the defining point for a casual player is "fun comes first". This includes life outside of WOW as much as what goes on inside the game. A casual player is more likely to drop a night of raiding for a fun event outside of WOW than a hard-core player. Within WOW, a casual player is more likely to do something goofy, just because we can and we don't have to use down time to collect things for the weekly raid.

In the end, for the casual player, it's not about the destination, it is about the journey, and how much fun can be had while on that journey. For many of us casual players, it's about the company we have on those travels. If there's a cliff we want to jump off, the company we keep is likely to start a competition to see who can launch themselves the farthest off that cliff. Or, if we see a pack of mobs along the road up ahead, well, "hold my drink and watch this". And, when it comes to raiding, we tend to ask, "Did the boss die? Did you die? Yes and yes. Great! Next!" because it's always more fun with friends.

Posted by Deb Montague at 9:33 PM No comments: