This column will be the occasional "Hey, have you done" or "You gotta try this" which introduces you to or remembers some great quests. Our first one comes from Zylostout. 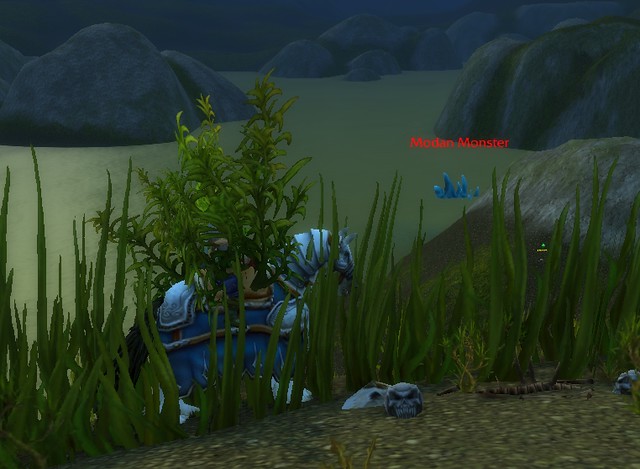 There's a quest line you can do in Loch Modan where you get to disguise yourself as a bush. I thought to myself, how far can I go while I am in this disguise?  Is this a magical disguise, good for all sizes? If I mount up, will I be a giant bush?  Well, I couldn't go very far and I wasn't a giant bush, but a bush riding a horse is an interesting effect none the less. The bush is the last quest in a rather amusing quest line that starts with "Who's In Charge Here?" and ends with "Axis of Awful".

(Editor's Note:  That's the Modan Monster in the background. His [her?] model is the same as any other kraken in the game only he/she is a light blue. He/she exists only to antagonize at level toons who happen to be in what's left of the loch to kill crocs or to get a better view, not that I would know about that.)
Posted by Deb Montague at 4:30 AM