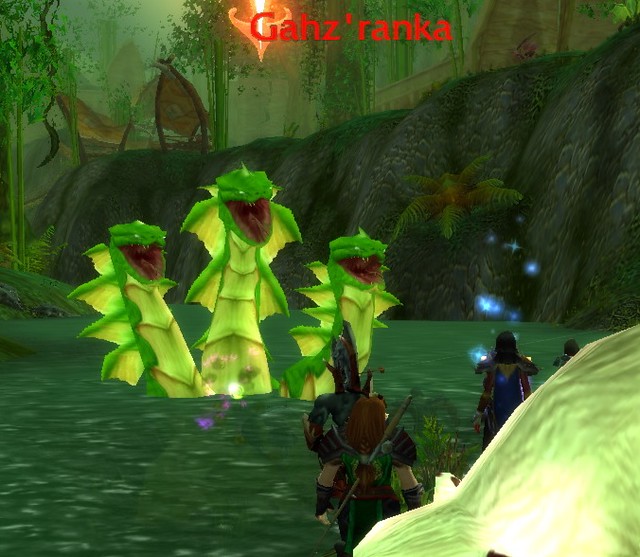 In keeping with Tuesday's photo, I present the boss in the waters of Zul'Gurub prior to the Cataclysm. For those who started playing at the end of Wrath of the Lich King or later, you probably never saw Zul'Gurub as it was originally designed. There was a bat and spider boss in addition to the raptor, snake and panther bosses which remain. It was often debated whether Jin'do or Hakkar was the final boss of the raid because you could go to one without affecting the other. We usually did Jin'do and then Hakkar.

The raid was designed for 20 people. It came out after Molten Core and its 40-man wipe fest. The gear which dropped here was incrementally better, than Molten Core's although, if you got tier pieces from MC, drops from ZG were not better if you had a set bonus. They were of a "jungle/troll" style with skins you couldn't find anywhere else. Even during the early days of the game, some designs were reused just in different colors. ZG designs were completely different.

At the end of Wrath of the Lich King, the only reasons to run Zul'Gurub were if you'd never seen the raid, 2) wanted some piece of gear for nostalgia's sake or, primarily, 3) wanted the mounts that dropped off the raptor and panther bosses. I never saw either mount drop to lose a roll on them, but I did see both mounts being ridden by people in the game so they did exist. If you needed cash, running Zul'Gurub as a level 80 was a great way to make money by selling everything that dropped.

With the Cataclysm expansion, Blizzard decided to repurpose the raid into a 5-man heroic instance. The bat and spider bosses are gone, although the entrances to their respective locations are still in the 5-man. The troll jungle theme was maintained and many of the gear and weapon drops from vanilla, when this was a raid, were maintained and upgraded. New mobs were added with new attacks and things which weren't in the raid. We had a difficult time getting past the first event, a cauldron of steaming green nastiness, until we had better gear.

Also gone was Gahz'ranka. He was probably the best part of the raid. You went to Pagel's Point and fished him up out of the waters of the lagoon surrounding the middle section. You couldn't use just any bait. You had to go to Duskwallow Marsh and, south of Theramore, find Nat Pagel, long rumored to be Azeroth's best fisherman. He had you do a quest chain for him that involved fighting a shark. Only when you were successful would Nat sell you mudskunk lures. You used these lures to fish up mudskunks. Five mudskunks would attract Gahz'ranka. You would fish up a whole bunch of fish you didn't need to get your five mudskunks so it was necessary to have several people fishing for them to maximize the time it took.

With a rumble, Gahz'ranka would appear out of the water. His big attack was a stomp that threw half the raid into the air. You took fall damage when you landed. Once we'd done it a couple of times, if someone was new to the encounter, we had them stand at water's edge and just watch. Sometimes, you hit the water when you came down. Most of the time, you didn't. Killing Gahz'ranka was the ONLY way to get the mage spell "Polymorph: Turtle", and he didn't drop it every time. Now, you can fish it up in pools from Uldum.

The best part is the fact that you could get Darkmoon Special Reserve at Pagel's Point. Outside of the Darkmoon Faire, this was the only place you could get this beverage. I remember filling most available bag slots with stacks of this because it was everywhere at Pagel's Point, and putting it up for sale in the Auction House. A stack would sell for the, then, princely sum of 20 gold, 30 if you were the only person selling a stack. I never could quite figure that out, but it was gold so I took it.

Gahz'ranka is gone as is the booze at Pagel's Point. You can still get mudskunk lures from Nat in Duskwallow, but there are no mudskunks to catch. In the waters of ZG are "spawn of Gahz'ranka", smaller versions of the great monster. There are other small bosses around the instance, indeed, if you're going to do everything you can in the 5-man,  you'll need to plan to come back at least 3 times. But, I have such good memories of the fun we had dragging people to get drunk first, fish next and get thrown into the air by something big and green they couldn't quite see.
Posted by Deb Montague at 4:00 AM