Jumping on the meme where you go through the documentation of your past and post a photo or a song to your blog or to Facebook, I thought I'd post photos from my 8 years of WOW playing. I've got a "few".

Raise your hand if you remember the world dragons; Ysondre, Tarer, Emeriss and the one above, Lethion. I remember when Spectacular Death decided we'd take these on. Ysondre was considered the "easiest", while it was a toss-up as to whether Emeriss or Lethion was hardest.

Each dragon had a special attack. I don't remember Ysondre's. Tarer would split into several shades. You had to endure that phase while dpsing the correct shade. Hunter and warlock pets knew so you needed to have at least one of those classes in the raid so you could target the pet's target. I don't remember Lethion's attack but Emeriss, shudder. I considered him (her? Do we know the sex of these dragons?) the hardest. He did a boat load of nature damage and, when you died, a mushroom spawned on your body. Anyone close to the mushroom when it exploded took concentrated nature damage. It was awhile before we were able to get Emeriss down. 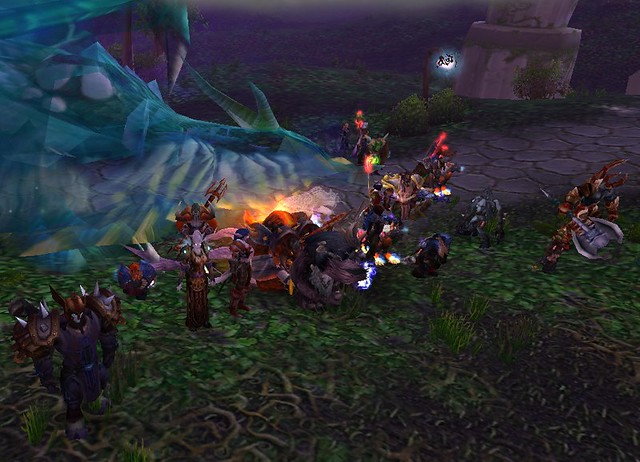 They spawned in 4 locations: Dreamer's Rest in Feralas, Serdane in Hinterlands, east of Forest Song in Ashenvale and Twilight Grove in Duskwood. You never knew which dragon would be in which location. Generally speaking, Twilight Grove and Forest Song were the most frequented. People forgot, usually, about Dreamer's Rest so you could often find one there when all the other places were empty. They were not tied to one location so one time Ysondre might be in Twilight Grove. The next time you went there, it could be Emeriss. They also had their own loot table with items you couldn't get anywhere else.

They were removed with Cataclysm and there is a quest chain in Feralas that discusses what happened to the world dragons after the Cataclysm. If you remember them it's interesting to do the chain, if a little sad. At the end of Wrath, the dragons were little more than loot pinatas. Their areas are given over to other things now.

I miss them. I don't know if their loot was moved to another mob or to a world drop or removed altogether. The fight mechanics were unique and needed some problem solving to surmount. At level 70 and in the early stages of level 80, you couldn't expect to solo them. I wish they had just been updated for Cataclysm.

Oh well, things come and go in the fluid nature of this game. I'd like to see them come back as rideable mounts. Now THAT would be an homage to some great dragons.
Posted by Deb Montague at 4:00 AM